Torbay Motor Club has won many club and event honours, including:

The Torbay Classic Reliability Trial is held in March, when a full entry of cars and motorcycles compete over demanding sections within the South Dartmoor area. The Club has experienced mixed fortunes with the event over many years, depending on the availability of an enthusiastic and dedicated team willing to take on the organisation of such a large event. With successful periods followed by those when the club had no-one with the time to organise it, the Trial is currently enjoying a very successful revival.

Recent social innovations in the Club calendar include successful Tours – Touring Assemblies to give them their formal title - with participants visiting places of interest along a specified picturesque route, and more recently the successful Breakfast Club meetings.

An informal sub-group – ‘MOCA’ – the ‘Mamhead Old Codgers Association’ - arose from the working party involved in course building at Mamhead hill climb in 2008 and although the venue is no longer used, the ‘association’ is still going strong! MOCA hold an annual Christmas lunch and have made numerous group visits, for example to the Morgan sports car company factory and aircraft museums. Despite its name, everyone is welcome – irrespective of age!

Although the club no longer organises rallies, Historic Road Rallies are an ideal starting point for competitors with older sports or rally cars, and events enjoy a relaxed atmosphere coupled with intense competition demanding teamwork, precise navigation and car control. Many of the club’s members continue to compete regularly in both UK and continental regularity road events and have the experience to advise and support any competitors interested in the historic rally scene. 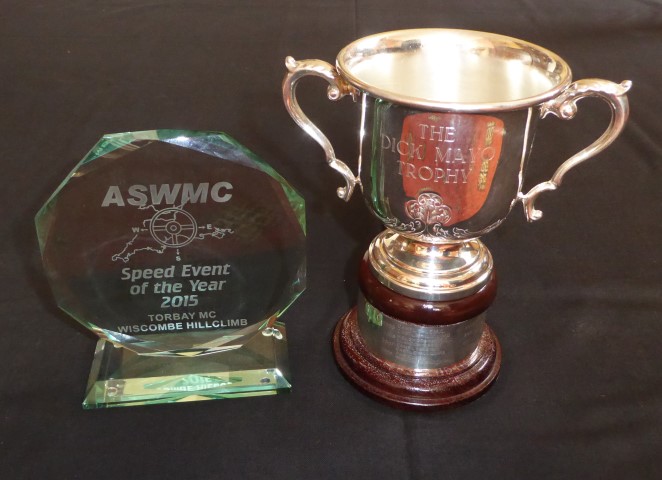 The club currently organises two speed events, the Wiscombe Park Hill Climb in May and the Clay Pigeon Sprint in July. The club’s annual visit to Wiscombe Park, near Honiton, caters for both cars and motorcycles and is the Club’s flagship speed event. The layout of the picturesque and historic venue gives spectators superb opportunities to be close to the action on the demanding hill climb, one of the few in the country that also host a round of the prestigious Motorsport UK National Hill Climb Championship.

The club’s annual sprint, complimenting two other sprints at the venue in early and late season, is run at the Clay Pigeon Raceway at Wardon Hill, Dorset, between Yeovil and Dorchester. The popular kart circuit has Motorsport UK approval for car sprints, which are run anti-clockwise (whereas karts race clockwise) to improve the run-off areas.

The Club is constantly searching for new speed event venues and has a good track record and the necessary expertise to develop new venues for motorsport events.

It is known that the club was founded in 1950, but exact details of its origins are lost in the mists of time, as no relevant club records survive to this day.

Since its inception, the Club has established a long track record of organising popular, competitive and successful motor sport events for the benefit of its members and competitors across the South-West and often beyond. The club has a strong record in speed hill climbs and sprints, but increasingly it has diversified into other disciplines, including rallies, autocross, classic reliability trial and social events, all of which have featured during the past seventy years of motor sport activity in and around the ‘Bay’.

The centrepiece of Club activity for many years, the twice yearly Oddicombe Hill Climb became the spiritual home of the speed event fraternity. Run over a 650 yds (594m) course, later increased to 849 yds (777m), the track rose steeply along the cliffside council-owned road through the wooded parkland, from the beachside paddock to a finish-line adjacent to Babbacombe Downs Road, Torquay.

First used in 1961, the event attracted an entry of fifty-three drivers and John Grafton set a FTD of 37.55 sec. with a Ford-powered Lotus Seven. Racing cars were limited to 1600cc engine capacity, and subsequently the twice-yearly events settled into a March and October pattern.

The course was lost to motor sport through no fault of the club after Torbay Council became a unitary authority in 1998. The formal arrangements designated the steep cliffside road as a maintainable highway, giving the previously anonymous hill climb course a newfound legal status that imposed the provisions of the Road Traffic Acts. In particular, it became unlawful to ‘race’ on the road, and a maximum legal speed limit of 30 m.p.h. was not compatible with the aims of a speed hill climb!

The Club first used various configurations of a 875 yds (800 m) course through the Finlake Holiday and Caravan Park in April 1994. Situated just off the A38 near Chudleigh, the weekend events became very popular with competitors and their families, together with marshals and spectators, as the available facilities were very civilised and offered accommodation, plus free access to the swimming pool, restaurant and licensed bar. Subsequent commercial development of the complex lead to the introduction of traffic calming measures onto the course, and the last event there was held in the Autumn of 2003.

Research suggests that the Club first used parts of the perimeter track of the WW2 RAF Dunkeswell airfield, near Honiton, to provide a demanding 1,0450 yds course, in October 1966, but no further details have been found. Later, a purpose-built kart track was laid out on the old fuel bay and parts of the runway to produce a tight winding circuit. In recent years, the Devon 4 Motorsport Association made up of Dunkeswell Kart Racing Club and Torbay, North Devon and Plymouth Motor Clubs held a number of sprints on the kart circuit. The venue was acquired by Mansell Raceways in 2007 and last used for sprints that year.

Mamhead House was the home of Alan Harper, an enthusiastic historic race driver, who invited the club to run speed hill climbs on the wide, well surfaced road through his estate. The first meeting was held on 31st May/1st June 2008, but Club members had been involved in course building since February that year, including the installation of Armco barriers from Finlake on part of the hill. Philip Montgomery-Smith set FTD in his Fisher Fury at 23.26 sec, and the fastest motorcycle was Glyn Poole on a 490cc Honda with a time of 23.62 secs. Sadly, the venue was sold, and the last event held on 20th/21st August 2011, but following extensive negotiations the subsequent owner permitted a course extension for a one-off weekend event on 15th/16th October 2016, before motor sport use of the venue folded once again.

For several years, events within the Manor Farm Holiday Park, at Charmouth, Dorset, were jointly promoted by Torbay, Burnham-on-Sea and Taunton Motor Clubs; when its initial popularity with competitors gradually waned, the decision was taken by the clubs to relinquish the dates at the venue. The venue was originally used for motorcycle hill climbs, and the National Hill Climb Association (NHCA) still run bike-only events at the venue.

The origins of Autocross are obscured by the mud and dust of early events held in the Midlands around 1947, but by the start of the 1950’s the simple concept was spreading in popularity, as early Autocross meetings were very friendly and non-professional. Enthusiasts competed in cars that they had driven there; and they drove them back home again after it was all over, often battered and bruised. It was simply a rugged race around a field borrowed from a local farmer, but the idea caught on and developed into the Autocross discipline we know today. By 1954, Autocross became more established in the West Country when Taunton Motoring Club organised the first of a series of regular events.

In the mid-sixties, John Player and Sons, the tobacco company, brought out their new coupon cigarette ‘Players No 6’, but they were denied the promotional impact of television as TV advertising had been banned - so they chose to support Autocross. In 1966 they launched a pilot regional championship series in the East Midlands and the following year sponsored a national series that continued for a further three years until 1970, when they announced their withdrawal of support.

By 1967, the RAC calendar of events included around 450 Autocross meetings each year, and the 1970/71 RAC Blue Book listed Torbay Motor Club as one of the many recognised clubs that organised Autocross events. This Club was very active in running Autocross events; research suggests that it held a round of the National ‘Players No 6’ championship at Newton Abbot Racecourse, but no further details are known.

Torquay had strong connections with rallying from as early as 1932, when it was selected as the finishing point of the ‘Torquay Rally’, an RAC-promoted event intended to boost trade for the resort. Under the slogan ‘Enter the Rally and See Britain’, three hundred and forty-one cars left various starting points on a 1,000 miles route, to converge on the town, where the RAC had arranged a number of driving tests on the sea front road.

From the 1950’s to the 1980’s, the Club ran their own ‘Torbay Rally’, which was a popular night-time navigation road rally event in the reginal championship calendar.

In 1999, the Club ran the first ‘Powderham Historic Rally of Devon’ based at Powderham Castle, near Exe-ter. The rally subsequently assumed the title of ‘The Devonian’ and was a round of the Historic Rally Car Register (HRCR) Clubman’s Championship, catering for cars built and registered before 1981. The distance to the far south-west for competitors coming from all over the country, and steadily rising increasing fees for test venues, finally combined to make the event untenable and the last event ran in 2006.

If you would like to discover more about motor sport, how to prepare your vehicle to the required specifica-tion and event regulations, please contact either a committee member via the club’s website - https://www.torbaymotorclub.co.uk and / or Motorsport UK at https://www.motorsportuk.org for further in-formation.

We use cookies to ensure that we give you the best experience on our website. By continuing to use torbaymotorclub.co.uk we will assume you are happy to receive all cookies. Find out more.